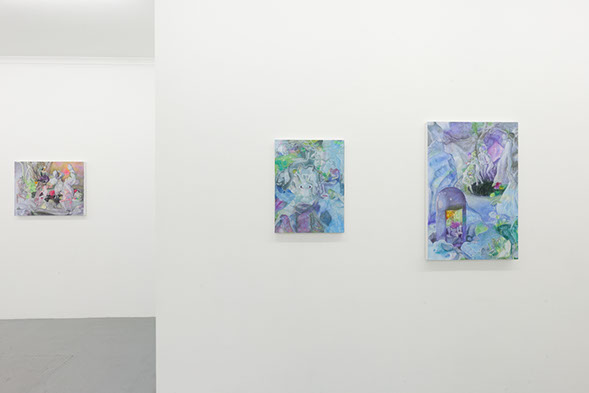 Upon viewing The Solar Way one may be overcome by an uncanny sense of emerging and becoming—a sustained mood of transcendence. In this latest suite of paintings Samuel Quinteros succeeds in harking back to the spiritual notion of art as transmission of energy, achieving imaginary worlds that are luscious yet freewheeling, bounteous yet strange, radiating an effervescent glow. Each work is so named after a different phase of the Sun’s daytime cycle, ‘Dawn’, ’Noontide’, and ‘Luminous Night’.

The titles serve as time stamps that tether viewers to these otherwise radically unknowable worlds, dictating the atmosphere of each realm. From the indigo glow of the ‘Luminous Night’ series to the amber tones of ‘Dawn IV’, the suite presents the incremental arc of daylight across the gallery space as reminiscent of the artist’s own experience observing the long, hot summer days in Kyoto, September 2017. Compositionally informed by the traditional style and technique of Ukiyo-e woodblock printing, viewers peer from above into the imaginary places contained within each painting.

The Solar Way began with ponderance of the worlds within Hieronymus Bosch’s pre-eminent The Garden of Earthly Delights (1490–1510), namely, the tryptic of ‘Eden’, ‘The Garden of Earthly Delights’ and ‘Inferno’. It is the universal mystery of Bosch’s worlds through time which gives license to contemporary artists like Samuel Quinteros to “complete” it. The artist yokes the sheer madness of Bosch’s vision with the three worlds and three mysteries of Esoteric (Tantric Tibetan) Buddhism: the worlds of form, desire and formlessness, and the mysteries of body, speech and mind. These disparate threads join to create worlds that cohere and flow together.

Tracing the passage of the sun, each piece pulses with the life that light creates. Compositionally anchored by shadowy caves, or dark pools of water, the images morph outwards, unveiling details anew as the viewer steps back. Swollen, twisting trees loom over women talking quietly, children playing music, guards sleeping, crowds in rapturous delight and warriors fighting. Each work derives its energy from the symbolic logic of what is depicted: energy, power, heat, fire, illumination, reflection, creation and destruction. Even the tower emerging from the watery depths in Dawn both mirrors a similar feature found in Bosch’s triptych and draws from the Buddhist temples or stupas in Kyoto, which are believed to have evolved from the ancient Indo-European religious feature of burial mounds. With its petal-shaped edges, the tower is in essence ‘solar’ powered, rising upwards.

Appearing both idealized and naturalistic with long-waisted bodies, flat noses and wide-set eyes, each figure is a container of sacred traditions. In their easy command of nature, Samuel Quinteros conjures primordial people everywhere, paying special tribute to the cultural syncretism between the ancient traditions of Stoicism (Greco-Roman) and Dharmic Philosophy (Hinduism, Buddhism). Both emerged around 500 BC in far-flung continents, and progressively merged over a millennium in Central Asia. The members of each vignette resemble immortals such as Tibetan Tantric Buddhist deity, Machig Labdron, the Greek deity, Thanatos, and the Hindu icon, Varaha avatar of Vishnu, each coexisting in a space that traverses history and sacred traditions.

It is a testament to the artist’s technical prowess that each narrative painting can be so loaded with symbolism, yet dreamlike that joy, wild freedom, curiosity and terror combine. Overarchingly, the sun is understood as a metaphysical principle of supreme centrality, virility. It seems no coincidence, then, that the process from inception to completion of 12 works has run the same course as the cycle of the sun. In the final month of that 12-month journey, Galerie pompom presents The Solar Way.