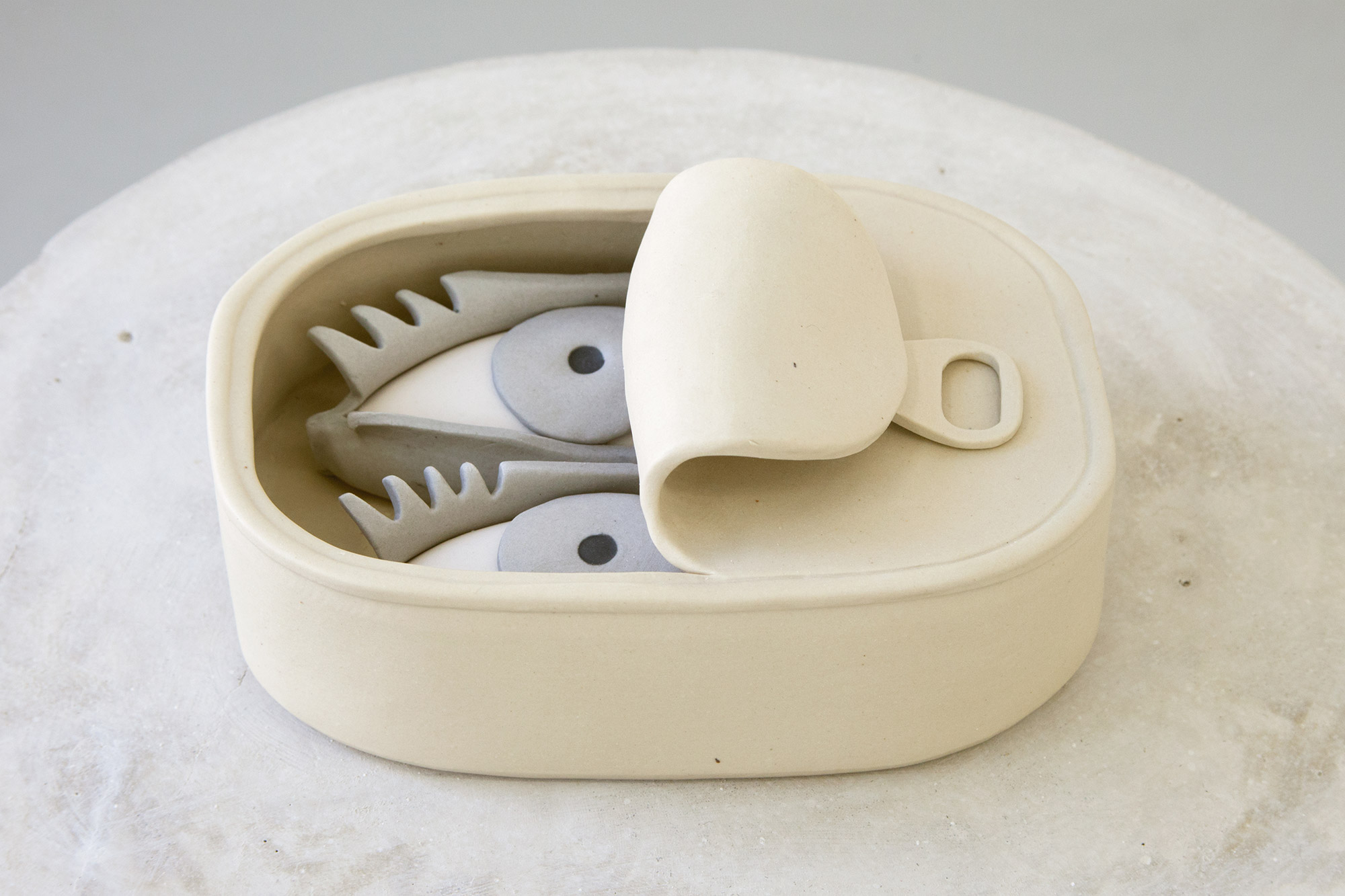 “I think art is a lot like tunnelling out of prison with a teaspoon,” says Brooklyn-based artist Genesis Belanger. The sentiment fits neatly with a practice that brings to life everyday domestic objects to address the complex and ubiquitous phenomenon of mass consumption. Though Belanger works primarily in clay, concrete and stoneware, the tools of her cultural ‘dig’, so to speak, extend far beyond the simple teaspoon.

In fact, beyond the initial surprise of the apparently benign or conventional mediums used to carry challenging ideas, what draws us to the work is its variety. In Center Piece (2018), blooming flowers are interspersed with a gaping mouth and plucking fingers; in At Rest (2018), a cigarette slumps, limp, over an ashtray; in Flutter (2018), the lick of a lighter flame is actually a tiny tongue; Dog in Heels (2018) depicts a hot dog squeezed into a stoneware wedge heel.

These unsettling assemblages seem all the more alive for their smooth, unglazed surfaces, pale fondant hues and soft curves. In humanising – and perverting – consumables, the artist seeks to interrogate the habits of the viewer. “Maybe they will see a reflection of something familiar and personal in the work but in a new context,” she suggests. “Acts they’ve once done without consideration may now be considered.” Harnessing the seductiveness of clay, the soft surfaces and sundae-sweet colours both entice and mirror the viewer – or what the viewer wants to be. Despite their strangeness, the works have a beauty that draws us close.

“The strategic creation of a desire for a ‘thing’ is frightening and impressive. The advertising industry understands our psychology and understands how we can be manipulated. I try to borrow from their toolbox… a manicured nail can sell just about anything.”

The sculptures are bizarrely sexy, with their gaping mouths, manicured nails and voluptuousness. The forms compel us to consider the human tendency to anthropomorphise our possessions so that they are marketable and serve as either an extension of the self or, in the words of the artist, as “surrogates for our self- identity”. For example, Unbiased Observer (2018) is a lamp that looks back; in Something Fishy (2018), a sardine tin is peeled back to reveal human eyes gawking at their hungry viewer. The objects do not exist independently of their consumer. The artist cites the cherries with stems tied, in Twisted (2018) and in Standard American Mouthful (2018), as among her favourite details in her latest suite of works. “Both indicate the presence of a body – a mouth – but in its absence,” she tells VAULT, “these details are marks of an action. ”The fruit evokes that iconic scene in Twin Peaks in which Sherilyn Fenn ties a cherry stalk with her tongue: an act of seduction. Here Belanger’s work leans ever so gently into a kind of sentimentality, imbued with nostalgia for the past. The works look like the ’80s felt.

“I am fascinated by the mechanisms used to convince us to hoard and consume mass-produced products,” Belanger explains. Having worked in the advertising industry as a set dresser, prop stylist and prop maker, she says, “The strategic creation of a desire for a ‘thing’ is frightening and impressive. The advertising industry understands our psychology and understands how we can be manipulated. I try to borrow from their toolbox. Sometimes I do this literally, as in my use of disembodied women – a manicured nail can sell just about anything. Other times my work is looking at our insecurities and complexities that make us susceptible to these constructed desires.”

The practitioner’s “toolbox” also includes art historical traditions of Pop and Surrealism. As with advertising, Surrealist art interrogates psychology and cultural mythology by breaking down the rational order of how we perceive objects. In tandem with her reference to contemporary images, Belanger’s distortion of the everyday calls to mind Salvador Dalí’s lobster phone, Meret Oppenheim’s fur-skinned teacup and Man Ray’s objects wrapped in felt. On a basic level, the manipulation of clay provides a rhetorical structure to engage with the manipulation of psychology. Belanger stresses the importance of research in her process. By scrolling through the “information buffet that is the internet” the artist collects a multitude of facts and reference images from a busy screen where “Louise Bourgeois sits one tab away from a blog about boots.” She calls on vintage and contemporary advertising as well as cartoon animation. Of her most recent art historical influences, she notes the “vast loneliness and absence” of Domenico Gnoli’s distended still lifes and the bloated figurative paintings of Fernando Botero, which according to her “are fat and sexy but in a funny, embarrassing sort of way”.

Each day, she begins by yoking multiple found images into concept drawings before moving into the ceramics studio. With her typical wry humour, she tells VAULT that the journey of following an idea “down the rabbit hole … is more relaxing than taking a Xanax”. These initial drawings form the basis of each sculpture, which is constructed from pigmented and natural clay bodies that are rolled into flat sheets. After drying the works for many weeks she only fires them once. In their final presentation the sculptures are held up by purpose- built furniture or concrete plinths that reference interior spaces, where the comforts of home are all back to front.

Born in 1978 in Massachusetts, Belanger earned her Bachelor of Fine Arts from the School of the Art Institute of Chicago in 2004, and her Master of Fine Arts years later in 2012 at Hunter College, New York. It seems, though, that 2018 has been her year. When I spoke to her she had four exhibitions down – including a debut exhibition abroad – and two to go: a group show alongside painter Emily Mae Smith at Perrotin, New York in early November, and a solo show at Ghebaly Gallery, Los Angeles.

The artist says of her work: “I am moving spoonfuls of dirt. I hope I will get somewhere, but I can’t be certain, and I can’t go back.” Genesis Belanger’s practice is firmly located in the present. What this artist makes is a contemporary archeology, immortalising modern everyday objects injected with humour using an age-old medium.