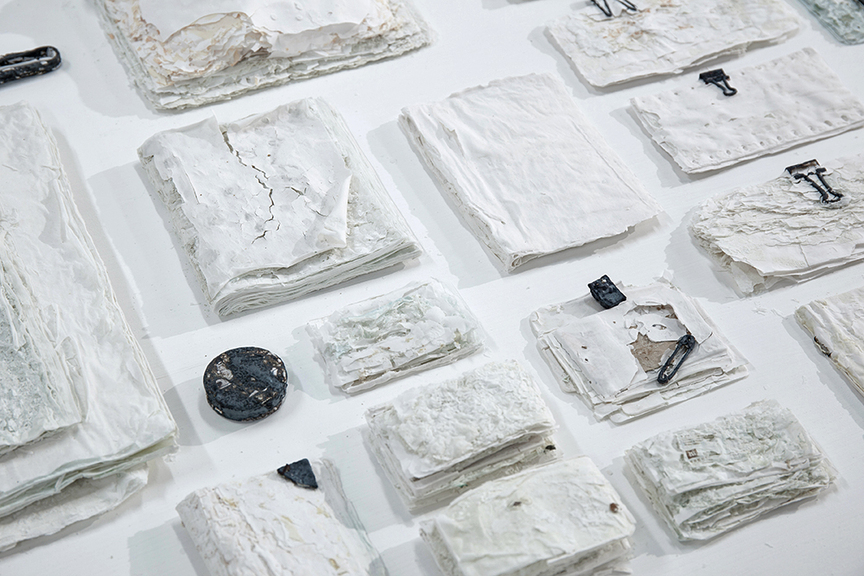 A knot, defined as “an interlacement of the parts of one or more flexible bodies forming a lump or knob,” can be both simple and complex; it can fasten and connect, or tangle and disrupt. This dynamic image forms the starting point for the works of ten artists in “First, Then and After,” currently showing at Hong Kong’s Gallery Exit. Though the image of the knot has multiple points of departure, curator and artist Ying Kwok has orchestrated an exhibition that unravels with exquisite continuity.

“The moon is still the luna. The night sky is still the nightfall. The star chart is also a map,” reads a plaque adjacent to Luke Ching’s compelling, two-meter-high diptych, entitled Luna and Moon (2006–15). Created with sweeping and recurring circular motions of pencil on paper, the spherical shapes are symbiotic with the accompanying poetic text. The slightly different shading and gradations deny the drawings of exact symmetry, creating two images that appear to be the same moon at different times of the evening. In keeping with the ever-changing subject that they depict, the works evolved in 2015 when the artist added a background to the drawings, which he had first created in 2006 during an artist residency in Vermont. Three small photos displayed beside the celestial bodies show the artist and his work-in-progress in various locations around the world.

Around the corner of the gallery, we zoom in on more earthly matters. Ceramicist Annie Wan once opened a drawer to find a mess of paper clips, train tickets, paper scraps, dog-eared books and even a pair of nail clippers. Though seemingly inconsequential, such quotidian entities form the histories of our days. Rather than disposing of her clutter, Wan replicated some items and covered others in clay and baked them, in an attempt to “fossilize” her everyday; this, then, resulted in the work entitled Sediments of Triviality (2015). At Gallery Exit, this haphazard time-capsule is neatly spread out on a clinical, white table.

The focus of Wan’s other work on display, The Road We Travelled (2015), is slightly more antiquarian: a non-fiction book that recalls the 1950s-era Hong Kong in which the artist was raised. Like the small photographs displayed alongside Ching’s Luna and Moon, a video recounts the making of The Road We Travelled. Through hypnotic, repetitive brushstrokes, Wan delicately conceals the content of the paperback, covering each page of her cultural history in concrete-colored clay. In its final manifestation, the book is rendered unreadable and less disposable—appearing like a cement relic of its earlier incarnation.

Otto Li also unties and reinvents vestiges of his past in a very different way. For When “We” Meet after 35 Years (2015) he dissembled a cassette tape and translated its audio recordings into a 3D form. The cassette label, which is displayed separately in a frame, tells us of the date of each recording—which comprises a few days beginning from November 23, 1980, when the artist was eight years old. Adjacent to the frame, the magnetic tape of the cassette appears ex situ, wrapped around a pencil divided into two. Beside the framed artifacts, an intricate bar graph rendered in wood brings forth the fleeting sounds of the past into the physical, visual present.

Another allusion to audio memory is Gabriel Leung’s Unusual Monument: Of Permeability and Silence of Our Time (2015), a black, textured soundproof wall, bent on a slight arc. The words “We contemplate the ravages of time” are inscribed in chalk on the floor before it; they are slightly smeared, in keeping with the work’s guiding sentiment. Although Leung’s work adds a lovely curving shadow to Gallery Exit’s expansive constellation of works, it fails to be compelling in its own right, as it engages with “the ravages of time” in a less sophisticated manner in comparison to the other works on display.

Moving clockwise around the room, one encounters Cam Wong’s Incomplete Moments-The Black Wall (2010). Measuring at almost two meters in width and height, the work is made up of 20 harmonious etchings of ink on paper. From a distance the work appears to depict the edge of the earth, as it spins through history. Upon being drawn in by the transcendent image, viewers can see that the many variations of shading in the faultlessly dappled etchings are equally interesting. As with this particular work, the exhibition as a whole should be slowly digested. It should perhaps be visited more than once, to ensure full absorption of the cosmos of works, which unpack memories, bring them to the fore and retie them in thought-provoking, visually captivating ways.