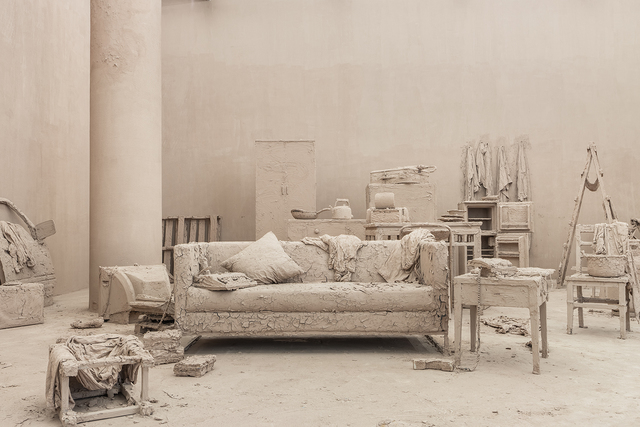 Tangled extension cords are spread across the floor, a filled shopping cart is missing two of its wheels and a bathtub sits across from a motorbike and a stack of books. A work of the late Chinese artist Chen Zhen (1955–2000), Purification Room (2000/2015) is a chaotic agglomeration of domestic objects. The familiarity of these everyday items is masked by an all-encompassing coating of clay. Its earthen layer renders the installation a modern archaeological site. When the work was first created in 2000, Chen referred to it as a “monochrome tomb.”

In a poignant twist, the capacious installation soon became a literal memorial due to the artist’s passing that same year. It was also the first of many breathtaking works in his recent exhibition at Shanghai’s Rockbund Art Museum, “Without Going to New York and Paris, Life Could Be Internationalized,” curated by Hou Hanru, artistic director of Rome’s Maxxi Museum.

After more than a decade of studying art in Paris in the 1980s, Chen returned to his native Shanghai in 1990 and was unnerved by how much the traditional landscape of his childhood was being taken over by modernization. The application of earth in Purification Room alludes to the material’s use in Chinese medicine as an agent for detoxification. The installation, therefore, was Chen’s attempt to “purify” the dust and debris that enveloped turn-of-the-century Shanghai as a result of endless demolition and construction. The remarkable work not only reflects the alienation that the artist felt upon encountering the homogeneous development of Shanghai, but also challenges spectators to consider the fleeting nature of their own lives within today’s fast- changing world.

Visitors encountered an equally imaginative contemplation on the complex relationship between tradition and modernity in Crystal Landscape of Inner Body (2000)—a delicate display of 11 human organs made from glass, spread out on the glass surface of a table. Given that Chen came from a family of traditional Chinese medical practitioners, and had suffered from chronic illness himself, he often addressed the fragility of the human body in his work. With Crystal Landscape, the exquisite detail and ethereality of its subjects were made even more striking by the fantastical shadows they cast through the table and onto the floor below.

Also on view was an immersive installation entitled Daily Incantations (1996), an orchestra of almost 100 barrel-shaped chamber pots converted into speakers. Set at the group’s center is a giant sphere out of which jumbled wires and discarded electronics flow from a metal frame. Sounds from the vessels serve as a sonic timeline recounting Chen’s audial experience of societal transformation in China: from the rhythmic washing of chamber pots recalling his childhood to the bustling crowds and distorted static that represent the country’s soundscape. The presence of the chamber pots encapsulates the past-present dialogue in China: though they were traditionally treated as an important dowry item and integral to continuing the family line, the vessels are considered ugly and unnecessary by modern citizens. When Daily Incantations was first shown in the 1990s, its striking mixture of old and new cultures explored the concept of “globalization” before it had fully entered the Chinese lexicon, and challenged viewers to consider the identity crisis that the artist experienced upon coming “home” to a transformed China.

Elsewhere, hanging from the ceiling was Precipitous Parturition (1999), a 20-meter-long, faceless dragon undulating in midair, appearing to be swallowing a mess of bicycles. The hanging belly of the creature, composed entirely of bicycle tires, is split open and unleashing a swarm of black toy cars. Its dramatic scale echoes an aspirational declaration made by the Chinese government at the time of the work’s creation, which stated, “By the year 2000, 100 million Chinese will have their own cars.” Chen’s use of recycled materials in this work represented his resistance to consumerism and the aggressive urbanization—or what he called the “neo-self-colonization”—of his homeland.

Hou stipulated that, through the use of found objects, Chen’s work “proposes ‘redemptive recipes’ of ‘rescuing’ and ‘curing’ the excessively developed and exploited nature” of contemporary society. In reflection of this statement, Hou’s superb resurrection of Chen’s observant commentaries and artworks salvaged memories of China’s heritage that continues to be uprooted by the country’s never-ending modernization.