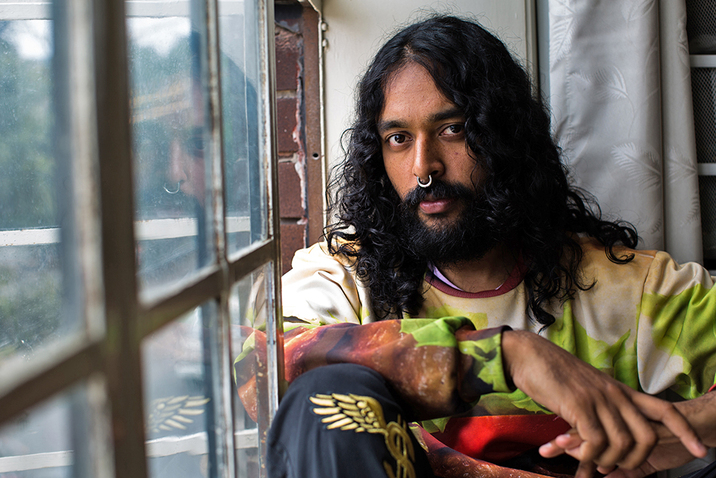 In 2014, the engaging ceramic and installation-based practice of Sri Lankan-born, Sydney-based Ramesh Mario Nithiyendran earned him the annual New South Wales Visual Arts Fellowship for Emerging Artists, which then led to a slew of awards and exhibitions. In late August, Nithiyendran completed a month-long mentoring program focusing on clay, at the Clayarch Gimhee Museum in South Korea, with Thai-born Australian artist Vipoo Srivilasa, and he also won the Sidney Myer Fund Australian Ceramic Award—for which he received the grand prize of AUD 50,000 (USD 35,000) and a solo exhibition, which is currently showing through to November. Amid all of this, Nithiyendran spoke to ArtAsiaPacific about the transformative power of clay, and how, by using the medium, he distorts and yokes Hindu mythology with contemporary narratives of sexuality to create multiple cross-cultural dialogues.

Your work is mostly based on explorations of gender, sex and religion. What aspect of these themes are you most interested in, and what keeps you returning to them?

I’m interested in ways that religious discourses place sanctions on sexual behavior and set up social codes to dictate interactions between genders. While I produce my work from an atheist perspective, I reference Christianity and Hinduism, as I was exposed to both while growing up. These were the two faiths practiced in my immediate family.

The complex operations and intersections between sex, gender and religion are ever-changing and multifaceted. This is especially the case as we become increasingly globalized. As the younger generations in Australia peddle towards atheism, I hope we may create a society free from social policy tinged with the hetero-patriarchy of Christianity.

Have you always worked primarily with clay?

I was formally trained in the school of painting and drawing at University of New South Wales Australia Art & Design (formerly College of Fine Arts). The more I painted, the less satisfied I became with the limitations of the two-dimensional plane. As I was exploring sex and creation discourses through my paintings, the shift to ceramic media in late 2012 seemed natural and catalyzed the development of my later work. The visceral, technical possibilities and symbolism of clay (as fundamental corporeal matter) make it the perfect material to engage with the politics of sex, gender and organized religion.

I am also an advocate for hand-based practices, and clay has a primacy [in the way that] it records the trace of the hand. In terms of artwork construction, I started small and really felt an affinity with the medium, as I developed my confidence through self-teaching and the generosity of peers.

I am interested in the parallels between your research on transgenderism and the transformative power of clay. Can you expand on this?

This parallel is central to my work. On a basic level, the manipulation of clay provides a rhetorical structure to engage with the manipulation of the human body and its symbolism. Many of my figures have both female and male body parts and functions. For example, while having a phallus, many of these figures have breasts, or can lactate, give birth and so on. I reference the bi-sexed nature of Lord Shiva. He is often presented with aspects of both genders. He is the Supreme Being in Hinduism and is often worshipped in the form of the Shivalingam. This is a phallic structure with a concave base, representing the union of male and female energies.

Additionally, through the use of clay, I aim to warp the Christian myth of the Genesis. This story witnesses “God” creating the first man, Adam, out of clay. This story has, and continues to naturalize, hetero-patriarchal ideologies in the West and the subsequent areas the West has colonized. There are various representations of Adam amongst the series of ceramic deities I present. He is often hyper-corporeal, has elements of both the male and female and proudly displays his phallus.

Do you agree that your exploration of phallus worship creates a little bit of an aura of taboo around your work?

It’s an interesting question to ponder. I imagine there is an element of taboo as we do not really see imagery of erect phalli in the public realm and mainstream media in Australia. However, while there are no institutionalized phallic cults now like those that existed in the past (in Ancient Japan and Greece, to name two), the contemporary context for phallus worship is the internet. This is a place where it thrives in the context of pornography, blogs and so on. Access to pornography is a matter of ease, and will only become easier with the completed installation of Australia’s forthcoming National Broadband Network. On a symbolical level, I believe Australia (as an arguably patriarchal society) inadvertently worships the phallus. While times are slowly changing, the conservative push of the current Abbott government means the white, patriarchal foundations of our colonial history seem to only be strengthening.

Can you tell me a little bit about your works that are in progress and how they will differ from your current projects?

This year, under the guidance of talented ceramic artist Jenny Orchard, I have been working on different techniques and producing significantly larger works. I am adventurously hand-building more intricate and complex forms and working with various raw materials in the glazing process. While the new approaches mean that things do not always go as planned, they ensure that studio production is exciting and engaging.

Conceptually, one new development is that I am shifting my work to create a critical dialogue with modernism—a key movement in Western art history. I’m referencing the work of Picasso and researching and the African masks [that he used as inspiration] in his paintings. This provides a fertile ground in which I am able to anchor my discussions around cultural appropriation, and explore Western constructions of the “primitive” and the idea of the” modern male master.”  I’m also exploring the traditional craft of Sri Lankan mask-making. Furthermore, my references to Hindu mythology are also expanding, as I’ve been focusing some of my work on the incredible figure of Kali. She is a Hindu goddess with a belt of broken limbs and a necklace of severed heads. Ideas around the fragment and the ruin are also taking form in these new bodies of work.

How do you hope your upcoming travels will enrich your creative practice?

I believe that cross-cultural dialogue is integral to the production of art and the development of an ethical and informed art practice. For these reasons, the opportunity to be mentored by Vipoo [Srivilasa]—a Thai-born artist based in Melbourne for whom I have great respect—and the focus on community during the clay mentoring program is highly appealing to me. Additionally, as an Australian with a Sri Lankan background, I am keen to contextualize my work within developments and discourses within the Asia-Pacific region. The seeming Eurocentric focus of many programs in Australian art institutions means that I must travel abroad to realize this goal. I will also be traveling to Europe in mid-2016 as part of my self-directed program of professional development, made possible through the 2014 New South Wales Visual Arts Fellowship. There, I will investigate European ceramic traditions to enrich my understanding and broaden my references regarding the Western canon.

Given that you have recently catapulted onto a much bigger stage career wise, with a broader audience base, have you noticed different reactions to your work?

I’ve had it censored and dismissed as rude, funny or coarse. Although, I do not represent penetration [in my artwork] and many of the phalli I portray are abstracted in style or are flaccid. Any artist, especially those dealing with loaded imagery, will receive varying responses. Yet, I hope it comes across that the phalli I portray are rhetorical. They are used as anchor points to initiate discussions of various themes (such as masculinity, colonialism and fertility, among others). That said, I see art as being fundamentally about the audience. I try to reject the exclusivity I believe is synonymous with much of the contemporary art I encounter, and instead provide a rich, visual experience for the audience.