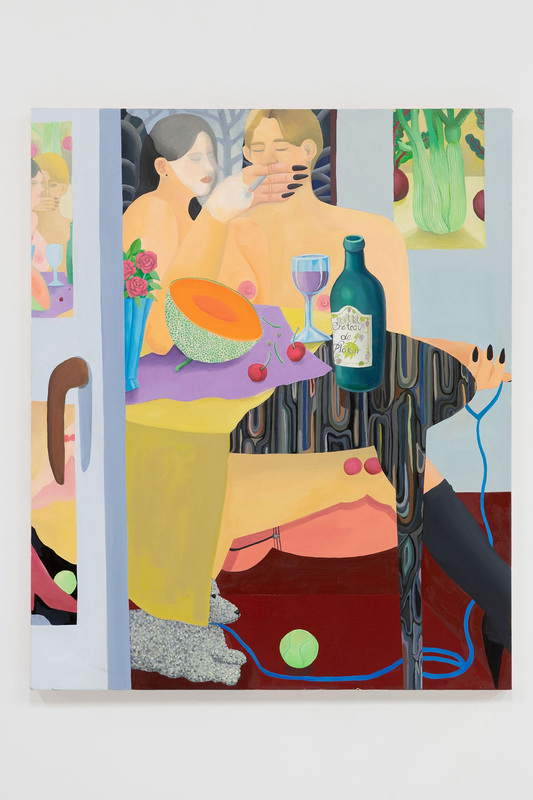 In author Ursula K. Le Guin’s 1986 essay, “The Carrier Bag Theory of Fiction,” Le Guin cites writer and editor Elizabeth Fisher’s “carrier bag theory,” which posits that the earliest tool was in fact a vessel for gathering and not a weapon—as is favored in male-centric historical narratives—pointing to the biases ingrained in the ways that we describe and monumentalize the past. Presented at Perrotin’s Korean outpost in Seoul, “No Patience for Monuments” pivoted from Le Guin’s text, “[Uniting] artists whose works push against a patriarchal, historical narrative and begin to offer a new way forward,” in the words of Perrotin director and organizer of the group show, Valentine Blondel.

This new ethos was captured in “No Patience for Monuments.” Sharing its name with the exhibition, Brooklyn-based Emily Mae Smith’s oil-on-linen No Patience for Monuments II (2019) was a standout work. In the painting, a luscious peak of whipped cream casts its shadow onto a blue-sherbet horizon, while a large hyper-elasticized tongue licks the centrepiece to steal a taste, and a liquified pool of the substance forms on the side. With its soft, sweet and delicate qualities, the treat is antithetical to monuments. Delivered with technical prowess, the imaginary, sci-fi-esque scene radiates with an almost nuclear effervescence, and is at once transcendent, alien, and droll—setting the tone of the show.

With an oeuvre that focuses on the strategic creation of desire, Genesis Belanger’s porcelain assemblage Breakfast in Bed (2019) depicts a pale, unglazed ordinary morning meal of eggs and sausages with a wedding ring wedged in a dollop of mustard that mirrors the shape of Smith’s whipped peak. The strange amalgamation of a quotidian breakfast and a treasured nuptial symbol casualizes both and lumps them together as obligatory rituals. Though the breakfast is distinctly American, the sentiment is not, and, with her signature wit, Belanger interrogates our gratuitous and universal adoption of both practices.

Seoul-born, New York-based GaHee Park’s Chateau de Plaisir (2018) depicts an equally intimate moment. A nude woman shares her post-coital cigarette with one hand and holds a dog lead with the other, while draped around her lover’s body in a quaint, domestic setting. With her dominatrix-style knee-high boots, long black nails and possession of the “lead,” the artist suggests the female protagonist’s control of the intimate encounter, overturning the conventional portrayal of women as sexually and domestically subservient.

Protesting against both the absence of women as makers in art history and a correction of their portrayal as passive subjects, the exhibition upended gender conventions with a cohesive showing of technical prowess and incisive wit, echoing the growing sentiment of its host-city.