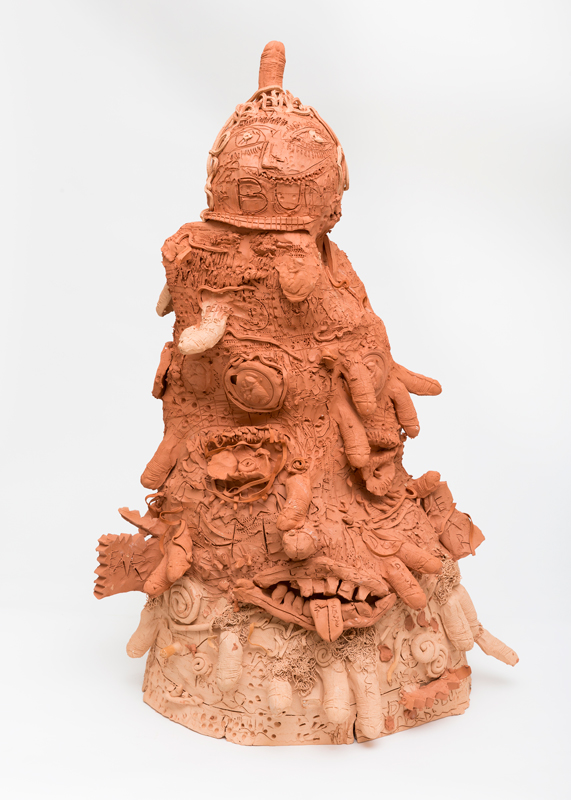 Of the earth and thus inherently fertile, clay has been used to create anthropomorphic forms since at least the Neolithic period. Ramesh Mario Nithiyendran, a Sri Lankan-born, Sydney-based sculptor, continues to work with this material today, producing corporeal sculptures that engage with contemporary discourses on gender, sexuality and religion. The synergy between his hand-based process and primal subject matter generates gloriously absurd caricatures of human and animal forms that are shaped by various creation myths and a broad spectrum of sexual cultures from across the world.

Underscoring the works of the 27-year-old is a parallel between the malleability of clay and the transmutability of gender and sexuality, as well as the religious discourses that dictate both. Among the works featured in the artist’s installation “Elephant Island,” shown last year at Sydney’s Artspace, Ganesh 2 (2014) is a fine example of the play on these themes. Glazed entirely in white except for a gold bindi and a toothy smile, the clay-molded figure resembles the elephant deity bearing protruding breasts and a phallus while sitting in a lotus position. Though Elephant and Child (2014), another object of the “Elephant Island” suite, is different in its kaleidoscopic coloring, it is similarly bi- sexed and also brimming with tensions. Here, the elephant deity possesses a phallus for a trunk and sits cradling a white baby.

In his current works, Nithiyendran draws from the ways in which the two faiths practiced in his immediate family—Hinduism and Christianity— engage with sexuality. He explores its unabashed representation in Hinduism through the bi-sexed nature of the Supreme Being, Lord Shiva. He comments on colonial powers, working in the heteronormative patriarchy of Christian narratives and also mixing in the modern-day cult of online pornography. The unrefined, crude finish of each sexed-up sculpture stands in alluring contrast to their well-considered, loaded symbolism.

Nithiyendran’s recent works have become larger, employing new glazing techniques and engaging with an even broader palette of cultural references, including research into traditional Sri Lankan mask-making craft and European modernism, particularly Picasso’s use of African masks. “The privilege of working with ceramics  is its extensive and complex global history,” the artist says. “This infinite lineage provides endless material to inspire experimentation and push the physical parameters of the medium.”