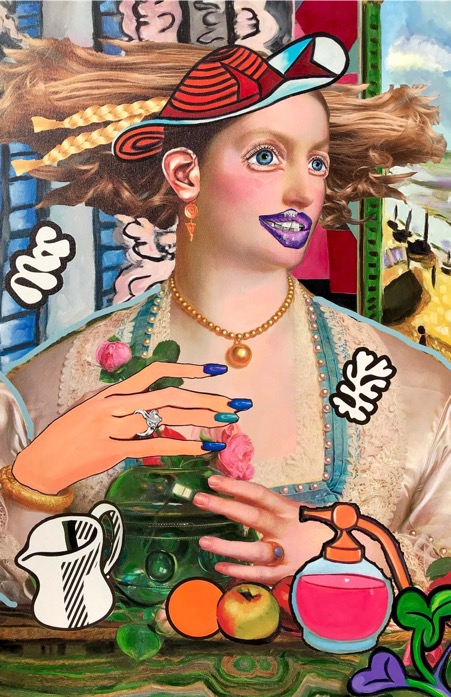 It was 1989: the year artist collective Guerrilla Girls rented advertising space on the buses that roamed New York city and loudly asked, “Do Women Have To Be Naked To Get Into the Met. Museum?” The poster was based on Jean-Auguste-Dominique Ingres’ Odalisque and Slave and featured a reclining nude wearing a gorilla mask and a footnote stating that fewer than 5% of the artists in the Modern Art section of The Met were women, but 85% of the nudes were female.

Almost 30 years later, the collection hasn’t changed much (in a 2016 count there were 1% fewer female artists, but more naked males) and history still tells us that, for the most part, women have earned their place in museums as muses and not as makers. Unlike the Hollywood #MeToo movement, there is no ‘inclusion rider’ in the telling of art history and its main male characters remain centre stage.

The works pack a powerful punch. “Each one is a dizzying mélange of Picasso, Lichtenstein and Manet bombarded with Snapchat filters, Walt Disney illustrations and emojis”. Though they straddle histories and reject any standard of beauty, Zuckerman’s subjects appear to be having a really good time. “The women that I depict are not objects,” she asserts, “they are not submissive, generic, idealised nudes whose only purpose is to provide a fantasy for a male viewer. They are intimidating and forces to be reckoned with. They refuse to be consumed.”The work is both a critique of, and homage to, the male artists who first painted them. “It’s similar to inviting them to my party and roasting them,” she tells me.

Rendered in various positions of repose and (censored) states of undress, the subjects remain haunted by the male gaze but give it right back, gawking at their viewers with big green eyes collaged from self-portraits of the artist herself. So, are the female figures Zuckerman? “They are to some degree,” she answers, “but are more of a visual depiction of the way I feel about being a woman. These women are navigating their way through the world: feeling vulnerable, powerful, hopeful and melancholic. They are figuring themselves out…”

It’s as easy to fall into these images as it is to lose yourself in the endless scroll of Instagram, each detail a sugar hit and the whole image a retinal cocktail. Belonging to the first generation of artists who grew up with the internet, Zuckerman delights in bringing the ‘low’ of internet culture to the ‘high’ of Renaissance painting. “Baudelaire’s essay on The Painter of Modern Life has remained particularly influential on my way of thinking in terms of elevating the banal into the epic,” she says. The 2017 sculpture Leda and the Swans encapsulates this. In ancient Greek mythology Leda was seduced into adultery by Zeus in the form of a swan. In Zuckerman’s reimagining, Leda runs bare-breasted in a garter belt and bow tie with animated Disney ducks. Humour, often overlooked as an unworthy reaction to ‘serious’ art, is central to Zuckerman’s practice. “Work that is sad and funny is my favourite kind. Comedy as the flashy side of tragedy provides a mood for my making”, says the artist.

Zuckerman gets her kicks out of these absurd pairings. While her practice is rooted in painting, she fell in love with the immediacy of collage during her time at college. The disparate imagery lends itself to “unexpected psychological leaps and arrivals” that are as thrilling for the viewer as they are for the maker. “I’m usually most excited about moments in the paintings that surprise me and transcend my own intentions. Sometimes it’s the way that a graphic element, like a solid circle, lays against a voluminous Cezanne inspired apple. In other instances, the rendered eyes directly painted on blue sunglasses do something uncanny while evoking empathy.”

The artist is interested in both how the seminal works have shaped history and how the consumption of them is mediated through technology. “I experience most art through my iPhone or computer screen. All paintings are pixelated because of this. And because I utilise printing within my practice, pixelation is inevitable… I am zeroing in on this phenomenon of pixelation; of the painted stroke re-presented as a pixelated stroke because of screen technology. Thus, the pixelation serves to reference differences of image resolution and quality, as well as the arbitrary use of censorship of nudity on social media.”Marc Wehby of Kravets Wehby Gallery – who of course discovered the artist by trawling through Instagram – cites the painted digital glitches as his favourite details in the works: “the artist’s hand becomes, in effect, the interruption.” In this, the practitioner considers the legacy of 1980s Pictures Generation artists Louise Lawler and Cindy Sherman.

Zuckerman owes her ascent to art stardom to the very platforms that inform her practice. Working as a gallery assistant in SoHo by day in 2016, she used Photoshop to refresh her old works and, in true millennial style, posted them on Instagram. It wasn’t long before a DM arrived from Wehby. Known for his knack for spotting fresh talent, the gallerist made a visit to her tiny studio in Williamsburg and booked her in to his next show. “I was so blown away by her work that I converted the exhibition I was curating to be only women,” he tells me.

Flash forward to an icy day in January, 2017. Zuckerman took the day off work to lunch with gallery co-directors Wehby and Susan Kravets. The artist was nervous, anxious that the pair regretted her inclusion in the show. She took her cue to leave as two visitors entered the gallery. Just minutes later, Susan called and asked her back. “The collectors want to speak to you,” she said.

The pair were Don and Mera Rubell, mega-collectors and owners of the largest private museum in the US. After chatting, they made a beeline from the gallery to her cluttered bedroom-studio alongside Wehby himself. “Well, you’re a nut,” said Don, upon entering before purchasing 22 pieces and later booking her in for an artist residency in their slightly loftier 45,000-square-foot Miami collection. The summer residency culminated in 10 works that range between three to five metres in length and according to Wehby are “truly monumental in person.” The show, Allison Zuckerman: Stranger in Paradise ran concurrent to Art Basel Miami and continues until late August, 2018.