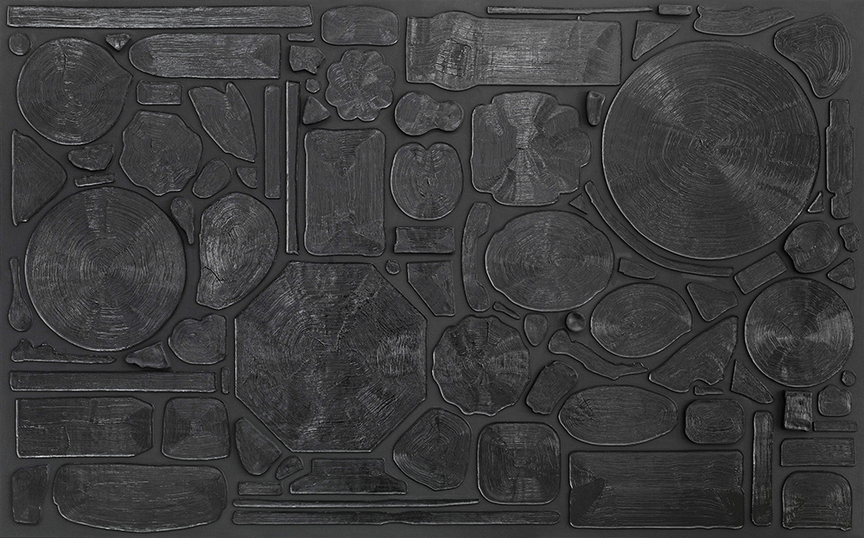 When an image can simultaneously resemble a satellite view of a high-density city and the interior circuit board of a computer, one is inclined to reflect on how technology influences and renders all parts of our modern world—both large and small—homogenous. Hong Hao, an artist whose engaging creations involve such concepts, is currently presenting his first Hong Kong solo exhibition, “Reflection,” at Pace Gallery.

Since his graduation from Beijing’s Central Academy of Fine Arts in 1989, Hong has garnered critical acclaim for his dynamic oeuvre that centers on satirical observations of contemporary culture, particularly that of his native China. Today, Hong’s thought-provoking work features in the permanent collections of New York’s Museum of Modern Art, London’s British Museum and the Shanghai Art Museum, among others.

Though Hong works across a wide spectrum of mediums—photography, print, collage and installation—“Reflection” focuses exclusively on his paintings. To create all of the seven works on display at Pace Gallery, which comprise recent pieces from his “Reflections” and “Reciprocating” series, Hong painted shapes onto scanned images of the underside of everyday items. The results formed a delicately arranged system of painted circles, oblongs and various other geometric forms—some of which appear flat and others three-dimensional—that “dematerialize” each object from its original function. This artistic process evolved from Hong’s earlier, widely acclaimed series “My Things” (2001– ), in which the artist scanned a vast array of quotidian objects collected over decades and grouped each into categories dictated by color or purpose. The vibrant photographic mosaics formed a history of his personal consumption and commented on China’s growing consumerism at large.

Moving clockwise around the room, the paintings at Pace take “My Things” as a starting point. The closest relative of the earlier works from the series is surely Reciprocating No. 10 (2014), hung immediately to the left of the gallery entrance. Composed in a delicate palette of beige and ruddy pinks, the work contains splashes of both polished and matte jade, where the scanned images are mathematically marked out with pencil or thick marker and painted inside using acrylic on a silk backcloth. On closer inspection, the mysterious origins of certain shapes sometimes reveal themselves. At certain angles one can distinguish the shape of a pillow, tray, fork and a spoon. Also interspersed throughout the varying colors and contours are raised forms made from primer that enrich the texture of the piece. The painting transforms as the viewer gradually discovers each of these dynamic aspects.

This work is followed by Reciprocating No. 11 (2014), a muted incarnation of its predecessor, created with a palette of lilacs, pale blues and whites. Though made from the same materials, the latter work contains an analogous pattern of what feels like organized chaos or accidental orderliness. It is perhaps the tension between the former and the latter work that keeps the viewers gaze moving around the room.

Occupying the adjacent wall is the largest work in the room, entitled Reciprocating No. 9 (2014)—spanning almost two meters in height and width and rendered in a monochromatic palette. Up close, as with many of Hong’s other works, one discovers the outline of pencil strokes. The delicacy of each brushstroke serves as a charming reminder of the artist’s process, which is done by hand.

To its left is a more recently created acrylic on canvas, Reflection No. 4 (2015), which is done entirely in black. One can distinguish shapes within the canvas, due to the variations in both dimensions and alternation between lusterless and polished coating among the different forms. In progressing through the gallery, the viewer moves through Hong’s conceptual assembly line, which offers imaginary and restorative alternatives to the countless industrious production lines of China’s factories. Hong succeeds in simplifying the overwhelming production and modern-day patterns of consumption. In doing so, his compelling paintings invite viewers to reflect upon—and perhaps take control of—the customary patterns in their own lives.