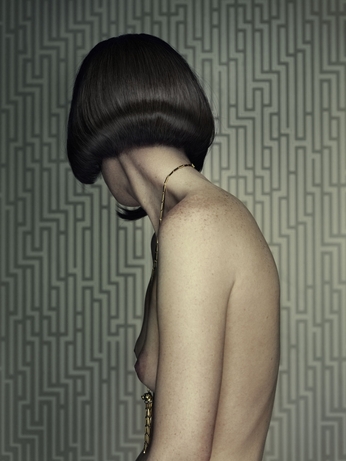 Whether it features a shy nude woman, an authoritarian child, a waiting dame, or a reflective athlete, each of Erwin Olaf’s cinematic photographs opens the viewer’s imagination to the stories behind his striking protagonists. At Hong Kong’s Art Statements gallery, the acclaimed Dutch photographer presents a seamless oeuvre of works produced over the last five years.

The exhibition, titled after the three distinct photographic series it displays, opens with an image of a naked woman’s gleaming skin. Her face is turned away from the viewer, and a necklace piece in the shape a gold leopard—the emblem of the haute couture label Cartier—hangs between her breasts. Each and every freckle on her shoulders distracts the focus from the photo’s ornate but blurred, blue-gray patterned foreground. The work, entitled Keyhole 2 (2010), conveys the stylized polish and meticulous attention to detail that runs through not only the exhibition, but the photographer’s entire body of work.

From delicate, ornate backgrounds to finely-tuned palettes, every detail of all five images in the “Keyhole” (2010) series is painstakingly controlled, with one exception—the protagonists. Olaf’s subjects seem to have an acute awareness of, and aversion to, the presence of the camera. The only character who faces the audience is the sullen, doll-faced child of Keyhole 12 (2010) who, nonetheless, averts her gaze downwards. One wonders whether she has just bid farewell to her family or been scolded by them, whether her sadness is valid or just a trivial tantrum. It is this mystery that elevates Olaf’s highly stylized images—which, incidentally, have attracted a long list of high-fashion clients—from editorial spreads to art gallery walls.

To enter the gallery’s adjoining room is to be pulled through Olaf’s “Keyhole” into the sweeping spaces of his “Berlin” (2012) series. So opulent and dramatic are the images’ settings—they were shot in the grand, historic buildings of Berlin—that most of them seem dreamlike. Set in a 17th-century Masonic lodge, Berlin, Freimaurer Loge Dahlem (2012) captures a young Caucasian boy dressed as a soldier, authoritatively pointing his tiny finger at a medal-clad, statuesque black man. Here, Olaf concurrently depicts the playful imagination of a child and the absurdity of white colonial power. Like most of his works, the single photograph commands enough interest to dominate an entire wall, despite its moderate scale. In Berlin, Stadtbad Neukölln (2012) an athletic young man is seen sitting at the edge of a pool, his skin dripping with water. A gloomy drag queen, who watches him while holding a wax-sealed envelope and standing high-heeled on a diving board, seems to be a specter of the contemplative stranger.

Leaving behind the subconscious realm of the “Berlin” series, viewers are next faced with the female subjects of Olaf’s most recent series, “Waiting” (2014), who appear impenetrable—oblivious to the camera and deep in private thought. Developed by hand on silver gelatin, the sepia tones of the photographs in the series embody the shadowy moods of each protagonist and contradict the rich palettes of Olaf’s previous works. The exhibition’s final work, Waiting: Shenzen Portrait 2 (2014), unveils what could be the face of the naked woman featured in Keyhole 2. Perfectly composed in another similar work entitled Waiting: Shenzen 2 (2014), the woman sits at a café table, waiting passively for her dining partner. In all of its ordered banality, the restaurant could be anywhere if it were not for the faint skyline showing through the semitransparent curtains in the background. The city environment waiting outside compounds the woman’s solitude. With this work, Olaf’s exhibition brings us full circle. First portraying actively guarded, uncooperative subjects, he then delves into the dreams of the strangers he photographs, before finally resigning to their enduring mystery. Through Olaf’s tremendous control of each frame and backdrop, he pays homage to the unpredictability and dynamism of each of his characters.